skip to main | skip to sidebar

While nothing beats walking, cycling or public transportation to keep you and Planet Earth in shape, a cool, fuel efficient vehicle is everyone’s fantasy. Sleek design, aerodynamics, alternative energy fueled, light weight and/or recharged in a standard electric outlet are the qualities that make this dream come true. And don’t forget your $7,500 U.S. tax credit on battery powered vehicles. In the U.K., the electric car initiative is so strong that even some supermarkets are offering electric charging while you shop. 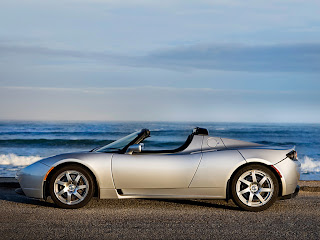 At the top of our list is the ultra hot Roadster. The sleek carbon fiber Lotus body with its powerful, efficient engine, fast acceleration and zero emissions makes this baby much more than eye candy, a clear winner, if you cough up the $128K+ price tag. What else do you get for your money? 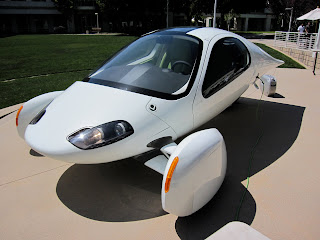 Is it a bird, a plane? No, it’s supercar! Nothing beats the amazing aerodynamic design of this cool eco vehicle. Co-founders Steve Fambro and Chris Anthony used birds as their inspiration to get rid of drag and increase efficiency with a composite body system, lighter than steel, that glides through wind. Designed as either an electric or hybrid vehicle, the Aptera 2e only sets you back $25 - $45K, depending on the model. Why choose this groovy green car?

• super efficient unlike standard cars that push air out of the way at
55 m.p.h.
• seats and carpet made from recycled plastic bottles and cups
• charged by a standard outlet
• 100 miles per charge.
• half the weight of an average vehicle
• body incorporates race car technology to deflect energy upon impact 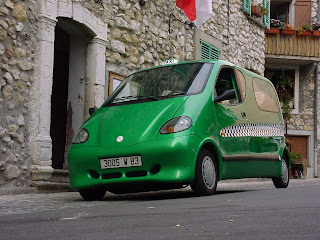 Not quite the sporty type, we had hopes and dreams for the MDI Air Car
because of its cool design, nominal price tag and conceptual approach to air compression as the unlimited energy source fueling this zero pollution vehicle. Prototypes and versions such as the above Air Car Taxi have been tooling around Europe for quite some time but when we searched for an update on production at Zero Pollution Motors, MDI Air Car and India-based Tata Motors, where it was slated to debut, it was up in the air, so to speak, with lots of controversy surrounding its viability. We at The Groovy Mind are banking on the future of this innovative renewable energy vehicle.

Meanwhile, a proliferation of R&D is under way on sustainably designed hybrid vehicles taking the Automotive X Prize challenge. Among them Visionary Vehicles and the Velozzi should be on your watch list. All the car makers are jumping in on the frey. Would you believe there’s going to be a Ferrari hybrid out this year? Stay tuned for what’s rad and what’s bad at the 2010 North American International Auto Show in Detroit from January 11 – 24.
Posted by The Groovy Train at 9:18 AM 1 comment: 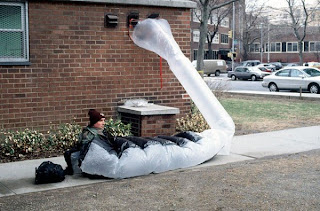 The age old debate of what constitutes art has yet another nexus to explore, art for art's sake vs. activist art, where the latter is a kind of intervention that carries with it ethics not normally associated with fine art. While this is only one definition of sustainable art, we at The Groovy Mind see sustainability as a tool that is multi-faceted. Art that is activist, art that transforms excess into functionality, art that consists of recycled materials normally discarded in the creative process...
Take artist/interventionist Michael Rakowitz whose work can now be found at Artsy.net. After studying Bedouin culture in Jordan, he returned to Boston to develop paraSITES, structures that “exploit the energy of its host.” Using elastic attachments he created inflatable ‘housing’ for the homeless that captures waste heat from outdoor vents in small, collapsible shelters. At first he relied on black garbage bags, an off the shelf solution that offered privacy but he eventually discovered that opacity didn’t matter because for all intents and purposes the homeless are invisible to the world around them.
SMART MUSEUM Curator of Contemporary Art Stephanie Smith forged this relatively new frontier several years ago with a travelling show called “Beyond Green: Toward Sustainable Art.” The art in this exhibition was a call to action in a profession all too often isolationist and elitist, housed within the confines of the hermetically sealed museum. As one participant Wochen Klausur explained, “In activist art, sociopolitical relationships take the place of material substances.” Again the privileged and the underprivileged form a network to upcycle materials discarded from exhibitions and transformed into functional works.
In another vein, artist/photographer Nicke Gorney never digitally manipulates her still narratives or black prints, which leads to excess experimental prints which she transforms through a creative process evident in her large abstract paintings. Using mixed media, brushstrokes, color and texture, she creates luminous, layered works called Photo Rehabs by painting over discarded photographic prints. Figurative and non-representational elements are both revealed and concealed, some infused with political and cultural innuendos while others are pure abstractions. 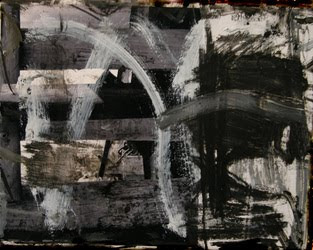 Just a few intriguing examples of the ever evolving movement of sustainable art. We leave off with the question of how to sustain the artist in a world that marginalizes creativity for the more profitable approach of turning a common denominator into a celebrity?
--Melanie Mitzner
Posted by The Groovy Train at 1:16 PM No comments:

Dying to Be Green 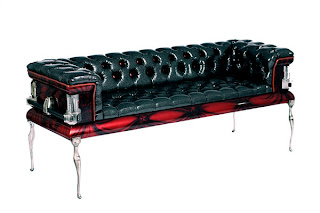 Mere mortals we are. Let's face it. We're all going to die sometime. But being embalmed with formaldehyde, a carcinogen that seeps into the groundwater, is not a comforting thought. Nor are impermeable caskets that don't biodegrade and cemeteries of land cleared of vegetation, wrecking the ecosystem. Even cremation, a Buddhist tradition, releases carbon emissions and produces mercury (from all those amalgam fillings in our teeth).

So what's a dead body to do? Have no fear, the Green Burial Council is here.

One such burial ground can be found through the Wisconsin-based Trust for Natural Legacies. Instead of manicured lawns and tombstones, flora and fauna abound. GPS coordinates help friends and families navigate the terrain so they can locate loved ones amid the beauty and splendor of a pristine environment.

Much like the "spirit forests" of tribal Borneo, where the dead are left on hallowed ground, a Ramsey Creek burial lays to rest the deceased in a 32 acre nature preserve.

Leading the movement worldwide with more than 200 green burial grounds, the U.K. has designs on land preservation where funds for green burials (which are half the cost of conventional ones) are funneled back into conservation. Go for the green hereafter. Be all that you can be. Be a tree!

Not dead yet? Take the deconstructive approach. An unused but unusable coffin couch. Recycle yo'self.
Posted by The Groovy Train at 9:59 AM 1 comment:

The Groovy Train
The Groovy Mind came from years of political and environmental activism and the desire to find a hip and socially responsible means of support for artist Nicke Gorney and writer Melanie Mitzner. Now they enter a new frontier -- monthly views and reviews of the very finest in sustainable design, from the culinary arts and fine arts to architecture, fashion and lifestyles. For more info on the arts - www.melaniemitzner.com and www.nickegorney.com . For more info on sustainable lifestyles - thegroovymind.blogspot.com .